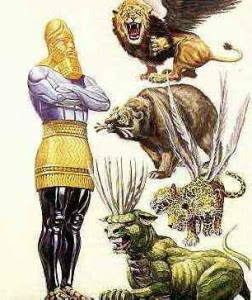 INTRODUCTION: Daniel 7 contains the inerrant, prophetic account of world history from 553 BC to the Second Coming of Jesus Christ. Remember this year, its importance will be made clear shortly. Within this exceptional chapter of the Holy Bible can be found the eschatological truth that the Roman Empire was the last of the world empires of ancient times and it will again be in existence as the final world empire at the Second Coming of Jesus Christ. Daniel 7, among other prophetic passages, is a key chapter of the Bible which puts the lie to all of the theories of an Islamic Antichrist or of a final Islamic world empire under him. Daniel 7 is the cipher key that unlocks the other prophetic chapters of Daniel as well as the Revelation of Jesus Christ.

LESSON: The first words of Daniel 7 inform us that his God-breathed vision came in the first year of Belshazzar king of Babylon. That would equate to the year 553 BC when the reigning king of Babylon, Nabonidus made his eldest son, Balshazzar, his co-regent in Babylon. Nabonidus he departed with most of the Babylonian army for Temâ in the deep western recesses of the Babylonian Empire to build a temple to and worship a moon god he called Ehulhul and whose symbol was an eclipse of the moon – the crescent moon. The full Old Testament-based historical account can be found at Livius.org.

Daniel then informs from his vision that he wrote down the head, or chief words (re’sh millah) derived from the vision, and which in English is expressed as the “main facts.” Therefore, Daniel 7 is a prophecy based upon both historical and future facts direct from God that had been sealed until these last days!

The text begins with Daniel explaining that he saw the “four winds of heaven stirring up the Great Sea.” This is a metaphor meaning that God would throughout history of the “times of the Gentiles” bring forth (giyach: stir up) great nations from among them. These great gentile nations are the four great beasts which rise from the sea of gentile nations, each one different from the one which follows.

The first of these beast empires is the metaphorical winged lion representing the Babylonian Empire. With 553 BC firmly given as the year of this prophecy, the end of the Babylonian Empire is a mere 14 years into the future when the Medo-Persian king Cyrus the Great would take the whole of Babylon in 539 BC with a surprise attack on the lightly defended Babylon as referenced in paragraph two above.

The second beast empire is the metaphorical bear with three ribs in its mouth representing the Medo-Persia. Note that Babylon is the key city in both of these empires. Cyrus needed only to secure the capitol of Babylon to take the whole of the Babylonian Empire which was inclusive of the entire Middle East, from ancient Elam north through Assyria and south to Egypt and what we know today as the western half of Saudi Arabia. Cyrus took one city with a minor military skirmish over the course of a single day in order to secure an entire empire.

The third beast empire is that of Macedon-Greece led by Alexander the Great which has been metaphorically presented as a leopard with four wings and four heads and to which complete dominion over the previous two beast empires was given. The 22-year old Alexander the Great’s conquest of the Persian Empire began in 334 BC with the Battle of Granicus in which 25,000 Macedonians and 14,600 Greeks, Thracians and Illyrians commanded by Macedonian officers overwhelmed and equally sized army of Persians (20,000) and Greeks (20,000) who had defected to Persia after the defeat of Philip II at Chaeronea four years earlier in 338 BC.

This action was followed the by the great Battles of Gordium and Issus followed by the sieges of Tyre and Gaza on the Mediterranean coast, all of which resulted in triumphant victories by Alexander’s army. After this the whole of Egypt out rightly surrendered to Alexander in 331 BC. Receiving major reinforcements from Europe at Tyre on the Lebanese coast, Alexander then set out for Babylon.

After securing all the lands between the Euphrates and Tigris rivers in Mesopotamia, it was on the plain of Gaugamela near modern-day Irbil, Iraq that the army of Alexander found the main Medo-Persian army of Darius on October 1, 331 BC. Darius had command of a great Asiatic army that was composed of Medes, Persians, Bactrians, Sogdians, Indians, defected Greeks, and even Albanians from the Caucasus. According to ancient historians Darius’ army numbered over one million men in battle array. A single charge of Alexander’s cavalry resulted in Darius forces fleeing the battlefield and Alexander conquering Babylon, the Persian imperial capital at Susa (former Elamite capitol) and the burning of the Persian capital at Perseopolis. Alexander was proclaimed king of Asia within a couple of months of the Battle of Gaugamela. Alexander continued his march to the east conquering Bactria, Sogdia and Indian Punjab as far as the Indus River by 326 BC. To this day Macedonian-Greek (original Javanites) and other European bloodlines run in the veins of the populations of these Asian nations- from the Dardanelles to the Middle East to India as far as the Indus River due to the fact that Alexander’s army intermarried with the local women.

The wings and heads of the leopard, itself a metaphor for the speed of Alexander conquests, are metaphorical representations of the division of Alexander’s Empire among his four primary Macedonian generals (diadochi) after Alexander’s death at Nebuchadnezzar’s palace in Babylon on June 10, 323 BC. To this point I have just covered the all of the real-world history of just the first six verses in Daniel 7.

Now we come to verse 7 and the fourth and final beast of Daniel’s God-breathed vision. There is no other gentile empire of importance on this earth mentioned by God after the division of Alexander’s Empire except for that of the Roman Empire. The final beast empire is an empire which has mutated over the past 2,000-some odd years only to re-emerge in the last days as a 10-nation confederacy among whom the single metaphorical horn of the Antichrist is to rise up. But first we look at Rome’s rise.

Rome began its rise as a republic, eventually becoming a world empire by over-running Greek colonies on the Italian mainland and Sicily in 272 BC. A few decades later Rome humiliated the fore-runner of the Antichrist who attempted to invade Egypt in 168 BC. The result was the Roman consul threatening war which sent to self-proclaimed god Antiochus IV Epiphanes of the Seleucid Empire fleeing northward to commit the fore-runner of the future 70th Week ‘Abomination of Desolation’ at the Temple in Jerusalem. Rome had largely culminated its rise to world domination by 149 BC with the conquest of the whole of Greece at the Battle of Corinth. Within the next 16 years the entirety of the Mediterranean Sea comes under total Roman control (133 BC) when Pergamum is taken whole by the will of its king Attalus. In 64/63 BC Rome took all of Aram-Syria and ancient Israel. This in sum is the context of Daniel 7 verse 7 wherein Rome was prophesied to devour, break into pieces and trample underfoot all the nations it conquered. To this point the vision prophecy of Daniel has been fulfilled to the exact detail which the “re’sh millah” expressed them.

It is of paramount eschatological importance to note at verse 8 that there is no end to the Roman Empire from God’s expressed viewpoint to Daniel in the vision. There are no subsequent world empires to the end of the current age not of just gentiles, but of all mankind. There is a “fast-forward” to the last days between the very last sentence of verse 7 and the beginning of verse 8 which launches directly into detailing the rise of the Antichrist from within the fourth beast empire and the return of Jesus Christ as the “Son of man” at the end of the 70th Week!

Here, brothers and sisters, is the point at which the eisegetical and thoroughly shoe-horned last-days Islamic Antichrist/Islamic Empire theory was euthanized by God Himself 2,545 years ago (553 BC to 2012 AD). That theory was null and void long before any of our greatest grandparents were even born. Therefore its relevance to today amounts to what exactly? Exactly zero!

From verse 8 the perspective of God speaks to the rise of the Roman Antichrist, the return of Jesus to the Earth, the killing of the Antichrist and the destruction of his physical body and the eternal burning of its black soul in the eternal flames.

At verse 15 begins the interpretation of Daniel’s vision by what is obviously an angelic being in the service of God. It is with this exegesis that I pray you will gain a solid understanding of both history and the coming future events, even though at some unknown point the Bride of Christ will be snatched away from this earth to a secure place for the duration of the final 7 years of history as we have known it.