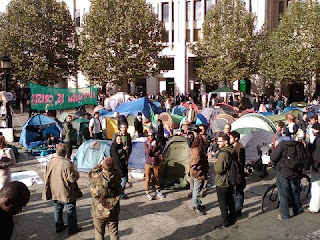 I note that the Dean of St Pauls Cathedral has decided enough is enough and called time on the anti Capitalist Occupy protest that invaded his courtyard last weekend. Rather brilliantly, he has used the "health and safety" universal get out clause so beloved by unions and the State to throw the few remaining jugglers and "colour therapists" off his steps.

It is a shame that the modern protest movement seem unable to unite to address what is a uniform grievance. Most people are genuinely pissed off with the State handing money, OUR money to failed banks that under proper capitalism would have gone to the wall whilst their overpaid Chairmen jumped from the top floor of their office blocks. Alas, instead, the usual rent a mob grabbed their Samba drums, crayons, stilts and loudhailers and set up "workspaces" where they could all agree with each other as long as no one actually did anything sensible. Media tents, meditation tents, crystal therapy tents. And a piano.

Meanwhile, in Greece, half a MILLION people decided enough was enough and no way were they going to pay back the money their Politicians had borrowed in their name to buy votes. Greeks are screeching that their wages have halved (well, they would when the other half was borrowed and your credit card is cut up) and no sooner had they arrived at Parliament, than the Statist communists decided to encircle the place and attack anyone who was protesting. Only one dead - this time.

This is how it works. Do not vote for Politicians who borrow money in your name if you are not prepared to pay back that debt. Do not expect money unless you have earned it and it rightfully belongs to you. Do not go and protest unless you actually know why you are protesting and have an alternative plan that can be offered, tested, tested again and proved. Simply sitting on the steps of a Church and demanding that brain surgeons be paid the same as litter collectors and aeroplanes should be banned because they are made by corporations is not the way to win over your fellow citizens.Setting up recycling facilities and art groups are not the greatest priority when the system is about to collapse. The Occupy movement STILL have no coherent demands, no theory, no alternative - well, that doesn't involve yet more of the same idiocy we have just elected out of office and bankrupted the country anyway.

For the same reason I do not belong to a political party is in all truth the same reason that Occupy has failed. Everybody wanted to be leader and everybody had an agenda that trumped their neighbours. All sought to control the herd and replace the farmer - the irony that they squatted on the steps of a Church because they were "friendly" was not lost on me last weekend.

So where now? Simple. We sit back and study what those with genuine grievances, the Greeks get up to. I suspect a collapse in their government, followed by a default, followed by a military coup, followed by a return to sanity where they herd goats and farm melons instead of borrowing French money to buy BMWs. The natural state, if you like. Sure, it will shock many of the idealists who assume every single economy can be "leveraged to engage with equality" or some such shite but you cannot escape the consequences of avoiding reality.

I have no answer for the UK. I'd like to see a major UK bank go bust - as Northern Rock should have, I'd like to see us renegotiate our relationship with the EU along the same lines as the Swiss have managed and I'd like to see more than the equivalent of a one party State filled to the brim with Party apparatchiks and spin doctors selling our souls to the highest bidders but sitting on the steps outside a church with a set of maracas certainly isn't going to do it - and why should it?

No, I'll continue my own little individual protests whilst gently extracting myself from their clutches. No TV licence for me, no census, no voting in their pointless elections and financing their vanity projects, no yielding to their demands or salivating at their promises. Like a single grain of sand circulating through an expansive highly oiled machine, eventually my presence will either produce a pearl or a seizure in a cog. I can wait, unlike most, I have made my plans to live without state intervention or a pension from a Politician - much to their annoyance.

My final message to Occupy? Don't use the system you detest. Go off grid, stop demanding the corrupt state employ you and pay you benefits, arrange your own finances and exploit the loopholes it leaves open. Realise that Politicians only have power over your lives because you allow them to. Develop your own individual ways to avoid the system and pretty soon, you won't have to protest because the actions of banks and politicians will no longer be relevant to your life.

And then, like the Church, like the Monarchs, like every dictator or tyrant who insists you do it their way, they'll hate you because you simply don't need to. Then you win. Got it?