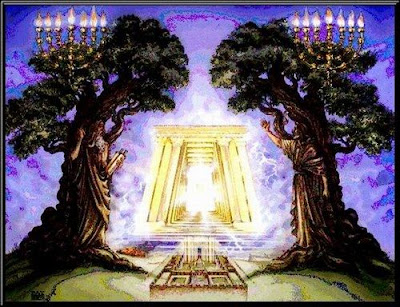 26 October 2010: I believe that most of Revelation 11 is very literal with just fleeting symbolic references. With that in mind let’s look at the Two Witnesses.

The Two Witnesses are God’s personal representatives on Earth who are active in Jerusalem during the first 1260 days of the 70th Week. They are anointed by God with tremendous supernatural power for all of those 1260 days. This is the same kind of anointed power that Moses and Elijah (Eliyahu in Hebrew – my God is YHWH)) both wielded in performing the will of God in ancient times. Their attire of sackcloth is symbolically important to Israel; both Moses and Eliyahu wore sackcloth and it is the attire of Israel’s prophets.

The Two Witnesses are human beings, they are Jewish and they may well be alive right now somewhere in Israel, or at a minimum are soon to be born. If alive now they are young and most likely unaware of their future calling from God or of each other. While many speculate that the Two Witnesses will be Moses and Elijah returned to the Earth, this is not at all likely because those servants of the Lord were long ago transfigured into their eternal bodies. This is known because both were seen to be present at the transfiguration of Jesus (Matthew 17:3-4). Therefore, the Two Witnesses are quite probably going to be two of the 144,000 Jewish male evangelists who will receive an exceptionally special calling from the Lord. This calling will likely be like that which Moses and Elijah received; both were literally called and began their missions for God abruptly.

In self defense of their persons their supernatural power will consume their human enemies with fire, the kind of fire that water cannot extinguish and consumes utterly and completely. Like Elijah’s fire. Their power will cause the cessation of any precipitation for the entire 1,260 days in which they prophecy. In the arid Middle East this is bad enough, but it gets worse. They will then turn other consumable water sources into blood making them unpotable, and stikr anywhere on Earth with all manner of plagues whenever they desire, like Moses did to Egypt prior to the Exodus. No wonder the whole world of deceived peoples will hate them with such a passion. The Two Witnesses’ only friends will be each other, the 143,998 Jewish evangelists and the Tribulation Saints.

And then their time is finished. At the end of the 1,260 days the demon king Abaddon/Apollyon is freed from the abyss, indwells and reanimates the Antichrist who has suffered a mortal head wound and he promptly kills the Two Witnesses to the delight of all the deceived around the world. Given the nature of their immense supernatural power manifest over the previous three and one half years the people of Jerusalem will leave their bodies lay where they will fall in the street upon death, refusing them any burial. These events will in all probability be seen live on satellite broadcast around the Earth in real-time. There will be unbridled celebration and gift-giving by the deceived, Antichrist worshipping millions around the world.

And then it happens, three and one-half days after their death these rotting street corpses will suddenly be resurrected and transfigured, confounding and terrorizing those who will see them standing alive once again. Suddenly the celebrating stops as this breaking news flashes around planet earth at the speed of light. The people will hear a voice from Heaven calling them upwards and they will witness a Harpazo ascension just like that which the disciples saw upon Jesus’ ascension. Up into Heaven on a cloud the Two Witness shall go while the world watches in thunderstruck awe. Within that same hour an earthquake strikes Jerusalem, a tenth of the city crumbles to the ground and 7,000 souls are killed. Many of those who survive will repent on the spot and give all praise and glory to the God of Heaven.

It’s going to be a non-stop breaking news cycle from Jerusalem in the middle of this 70th Week, and the worst of it is yet to occur. The Antichrist, the False Prophet and their forces are now about to enter the Holy Place and the Holy of Holies of the Temple that John the Revelator just measured with a reed in the opening verses of Revelation 11. They are there to halt the worship services and stand up the Abomination of Desolation. The return of Jesus Christ and the Kingdom of God on Earth is now just 42 months away.