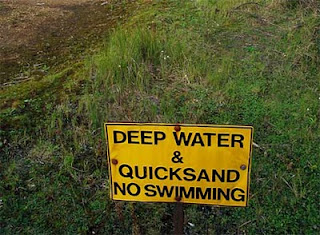 Conference hyperbole? Possibly, but onething is for sure, I can certainly hear the distant rumble of trouble. REALtrouble. German banks are going to have to be “recapitalised” at a cost to theGerman taxpayer of €167 billion, so that they can hand money to the Greek bankswho in turn can repay the French banks for the projects they financed to makethe European Union the bundle of democratically elected fun it is today. VanRompuy states it would be “mind boggling” if the Eurozone were break up into atwo tier system and word is afoot that the Chinese housing bubble is about toburst.

In other words, our exalted leaders arestruggling in the quicksand they created. More so, they are pleading to standon our shoulders. Having plundered our money, they are hiring 2,000 new tax inspectors tohunt out the last few remaining morsels of other peoples money and still, theyrefuse to stare into the abyss that faces us.

A collapsing system, built of straw on asand foundation is not going to stand up to the battering it is about toreceive. The obedient Germans are not going to take much more of bailing outGreek Banks on behalf of the French Banks. Already Merkel has been told in nouncertain terms by the voters of Berlinthat it stinks and more is to come.

But to return to Vince’s quote, he may wellbe right. Our money, our earnings, our labour has been subjected to a brutalassault at the hands of Politicians. Propaganda floods the airwaves telling usto “pay our fair share” of a cake I didn’t order and have no appetite for, andin the background, the Generals of the banks belly laugh at us. No strugglingin the swamp (or a single jail sentence) for them, just a vague threat that innine years, if they haven’t won the war and created what the Politicianspromised us all they would create, they will be forced to sit on the naughtystep for a bit.

Personally speaking, I am prepared foreconomic war. I have kept my powder dry and learned my craft. I am no mindlessdrone slaving away to own an iPad in the hope it will bring me happiness. When thebanks come calling, via Vince Cable of course, for more of my money (to fightthe good fight – onwards comrades), they will be met by my own littleresistance. War is a choice and there is no way I intend to fund the realenemy, the ones who opened fire on us, contrived to enslave us whilst Lord HawHaw of Cable bleated how we must work longer, harder and faster otherwise the “state”will face great problems.

Bring it on Vince. I’ll see you on thebeaches – mind the quicksand, quantitive easing has diluted it to perfection.