Global SITREP A16-13: "I Will Set Egyptians Against Egyptians" 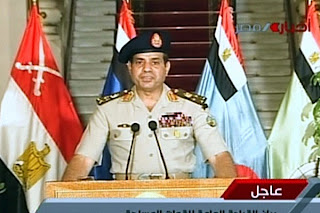 03 July 2013: Today the Egyptian military made good on its 48-hour ultimatum and sacked the Islamist al-Ikhwan al-Muslimun President Mohamed Morsi. The announcement was made on Egyptian TV by 58-year old Army Chief of Staff General Abdul-Fattah Khalil el-Sisi this evening because President Morsi "did not meet the demands of the masses."

In the announcement General el-Sisi suspended the Egyptian constitution and effectively removed the Islamist Ikhwan from governance, replacing it with a technocratic interim ruling council led by the head of the Supreme Constitutional Court while preparations for a new round of transition elections are planned for.

General el-Sisi's announcement was greeted with wild jubilation and fireworks in Cairo's Tahrir Square while to the north, in Alexandria, armed clashes between Islamists and anti-Ikhwan protesters are raging this evening on its streets.

The situation in Egypt is extremely dangerous and a new phase of the Isaiah 19 prophecy concerning Egypt is unfolding before our eyes. The Islamists can be counted on to launch a counter-coup with the goal of killing the popular Egyptian style democracy and replacing with a totalitarian, clerical Islamist regime like that of the Islamic Republic of Iran. Egypt's troubles are just beginning.