All over by Christmas? 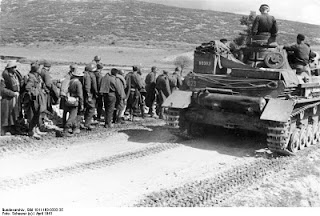 Germans rounding up the Greeks again

Unelected Marxist EU head Barosso, afterdecades of acquiring power only to watch his visions fail has finally decidedthat if he cannot get his hands on the money to allow Greeks to drive BMWs likethe Germans, he will take it from those who have it via “Robin Hood” tax on bank transactions. Inother words, you and I.

He assumes, as all Marxists do, that all moneyis evil unless it is in their hands. He assumes that banks generate theirprofits from thin air (central banks under socialist control actually do, I’llgive him that) and that any cost will not passed straight on to us, thecustomers.

On the day when German politicians votedfor more of the same failure, despite the wishes of their electorate to call ita day and stop the sheer idiocy of throwing their hard earned money at the profligate backers of melon farmers, the EU decided that what they neededinstead of a bucket full of holes was a LARGER bucket full of holes, bailingmadly whilst the Titanic gently slips beneath the waves. Taxes, more taxes,more taxes, yes, that will save us all.

It can’t go on much longer because theresimply isn’t the will to keep bailing. Sure, Politicians love it, bankers loveit and 24 hour media loves it, but eventually it will dawn on the millions ofpeople who actually DO work for a living that 73 per cent income tax is nothingmore than State slavery, no matter how much it is dressed up with tax creditsand child benefit refunds.

The great German Political dream todominate Europe could once again bankrupttheir nation because although wars are expensive, endlessly printing moneyinstead of simply invading with an army never ends well. Especially when theGermans do it.