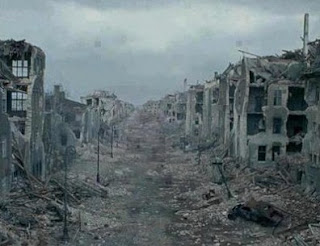 "Behold, Damascus will cease from being a city,
And it will be a ruinous heap."

22 March 2013: There are ever increasing indications that the literal fulfillment of Isaiah 17 may well be on the proverbial 'fast track' to prophetic fulfillment.
My assessment in Global SITREP A1-13 reflected two types of known chemical agents, PCl3 and BZ, that were initially suspected in that attack according to most MSM reports. Those chemical compounds led to an early and possibly pre-mature accusatory finger being pointed at the al-Assad regime by the Obama Administration and the European allies. However, what is coming from our intelligence services now is that there was no WMD chemical attack per se, that what occurred in the Khan al'Asal district on the western approaches to the city of Aleppo appears to have been a chlorine IED attack that bears extremely similar fingerprints to the early Al Qaeda chlorine IED attacks that occurred in the Al Anbar Province of western Iraq during 2007, and which re-directs the accusatory finger on the Al Qaida elements within the rebel forces.  It goes without saying that the first casualty in any war is the truth, but if this was Al Qaida then there will be more attacks like it in the very near future and they will mirror those that occurred in Iraq with increasing sophistication and body count. It may be that Al Qaida would like nothing better than for the Al-Assad regime eventually to retaliate with a WMD chemical assault of its own. They may yet get their wish.
This brings us to a report published in the first week of February 2013 by retired Army intelligence officer LTC Rick Francona entitled "The Coming Battle for Damascus" and "The Coming Battle for Damascus - Addendum" published on 9 March, 2013. Look at the title carefully and consider it... not the battle of Damascus, but rather the battle for Damascus. The thinking goes that whoever control Damascus controls all of Syria. Now reflect on Isaiah 17 and the image above which is not of Damascus. It is actually an image taken of a section of Aleppo already reduced to ruins by rebel versus government civil warfare. Here we have another possible avenue to the destruction of Damascus, and indeed the entire country. The analysis continues by noting the the FSA has determined that Al-Assad intends to defend Damascus with  four combat divisions all led by loyal officers of Al-Assad's own Alawi sect, the 1st Armored, 5th Armored, 7th Mechanized and 9th Armored, which have been pulled back from their normal positions facing Israel across the Golan. In addition to these four there are also the two most elite divisions of Al-Assad's army, all of whom are loyal Alawis, the 4th Armored Division and the Republican Guard Division. Damascus is now surrounded by and filled to its gills with six of the Syrian army's best divisions. It would not take long for a two or three pronged rebel offensive to take Damascus to actually reduce the city to something far worse than the image above. Add in the significant potential on this urban battlefield for the use of persistent chemical weapons should the regime's fortunes in war come to the point of collapse and the situation could well turn out to effect a literal fulfillment of Isaiah 17.
The point of this is that while most eschatological views currently hold that Israel will be involved in the fulfillment of Isaiah 17, there are now in place around Damascus the right military forces with the right capabilities to turn this most ancient city to the ruinous heap as foretold by Isaiah in very short order and possibly within a very short span of time from today.