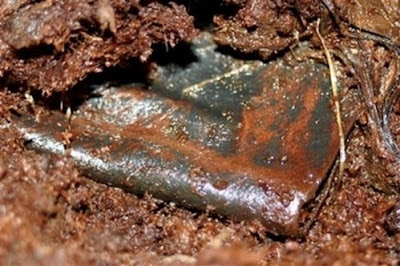 14 February 2010: Most of us are by now very familiar with the Eastern Leg-Islamic Antichrist proponent known by the alias "Joel Richardson." Some of us are even aware of the fact that he is a man whom It's Supernatural! talk show host Sid Roth declared was "hand-picked literally by God to give revelation of the end time." "Joel" agrees with him and declared on that program that the Lord did indeed anoint him through the word of a prophetess who prayed over his future wife and some unknown speaker in a 7,000-seat civic center meeting. A couple of weeks ago this "prophet" spoke exclusively again through the internet medium known as WorldNetDaily, and the topic of his divine revelation was "Does Psalm 83 Describe The Next MidEast War?"
Needless to say, "Joel" writes about some perceived problems with the "widespread" view that yours truly and many other far more prominent prophecy authors, ministers, teachers and students hold that Psalm 83 awaits an imminent fulfillment prior to the 70th Week. I happen to believe that Psalm 83 has been in the process of a literal fulfillment since May of 1948, but you already knew that. So off we go to address a couple ""Joel's problems with our Psalm 83 view. And before I begin, let me say that I think it is obvious that "Joel's" intent with his article is to attempt to gain some more notoriety for himself by opposing the majority view interpretation of Psalm 83. He does not succeed in this endeavor as I will now conclusively demonstrate.

Joel: "The first problem is that most scholars reject the idea that Psalm 83 is even an actual prophecy, but is simply, “a national prayer of lament.” Such a Psalm would not be considered a prophecy in the sense of that which was uttered by the biblical prophets."

This statement is in error on several fronts. First, most scholars do not reject the idea that Psalm 83 is an actual prophecy. They understand it to be a prophetic imprecatory prayer. Secondly, these scholars hold to this understanding because they know the Bible and are acutely aware that the Bible declares the writer of Psalm 83, Asaph the Levite priest assigned by King David "to minister before the Ark of the Lord, and to record, and to thank and praise the Lord God of Israel: Asaph the chief..." was a prophet (1 Chronicles 16:4-5). 1 Chronicles 25:2 declares: "Of the sons of Asaph: Zaccur, Joseph, Nethaniah, and Asharelah; the sons of Asaph were under the direction of Asaph, who prophesied according to the order of the king." Even thereafter, in 2 Chronicles 29:30 we read: "Moreover Hezekiah the king and the princes commanded the Levites to sing praise unto the LORD with the words of David, and of Asaph the seer (Hebrew: chozeh - a seer, a prophet)." Therefore, as we can clearly see through God's Word, Asaph was a prophet, and Psalm 83 is a prophecy no different than any other prophecy in His Word.

Joel: "...Asaph, the writer of this Psalm, mentions that “Assyria” will join this coalition. When this Psalm was written during the reign of King David, the Kingdom of Assyria included portions of modern-day Iraq, Syria and Turkey."

Not exactly Joel. In the hundred year period circa 1000-900 BC from when Asaph wrote Psalm 83, Assur (Assyria) was in full retreat from the lands it had occupied to the west and was centered in modern-day Iraq in the Tigris and Euphrates valleys as seen in this map courtesy of the Assyrian National News Agency. Who knows Assyrian history better, the modern descendents of ancient Assyria or Joel Richarson? Sorry Joel, but one cannot cook a "Turkey" that is not in the Psalm 83 pot.
Additionally, the full context of verse 8 in Psalm 83 is that Assur would be of assistance or lend strength or of help to the "children of Lot" during the fulfillment of this prophecy. That has been the fact of the matter as I see it since the first Arab-Israel war of 1948, the Six Day War of 1967 and the Yom Kippur War of 1973 when, respectively, Iraqi generals were commanders of the Arab forces and placed large numbers of their troops on the front lines with the Syrians and Jordanian armies. The Yom Kippur War of 1973, in particular, saw a squadron of Iraqi Air Force jets operating against Israel from an Egyptian airfield and an Iraqi division of 18,000 troops along with 800-some odd main battle tanks alongside Syrian troops in the Golan.
As for Joel's assertion that Psalm 83 and Ezekiel 38/39 are the same war, well, let's just say that such an idea is thoroughly refuted by a Berean one-on-one comparison of the texts that it would be a waste of my time and your time to address them here.