The folks at the USDA released their projections for 2011/2012-food price inflation. The bad news is that feeding ourselves will cost ~4% more in 2011. The good news is that USDA thinks prices will rise only ~2.5% next year.

I shop (I hate it). My food inflation is closer to 10%. It depends on what you eat. For example, from the report:

These items are all well above the average set by the USDA. The following kept the index low:

After looking at this I loaded up on canned peas and Coke.

Answer: 52% is prepared at home, 48% is purchased and eaten onsite or taken home. Half of what we eat is “out”. I find that to be a surprisingly high number. Behind that 50-50 ratio is, no doubt, the problem with diabetes and obesity.

If you were wondering how the restaurant-bar business did during the depression the USDA has the numbers. My conclusion is that depressions are very bad for eating establishments. It takes a long time for a real recovery in spending habits. It’s also clear that wars are very good for the restaurant biz. 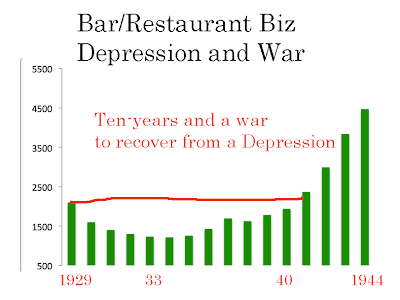 The “eat out” numbers did fall in 2009. But they recovered in 10’ and are headed higher again in 11’. We had recession. A big one. But consumers barely batted an eye. I’m surprised at this result. 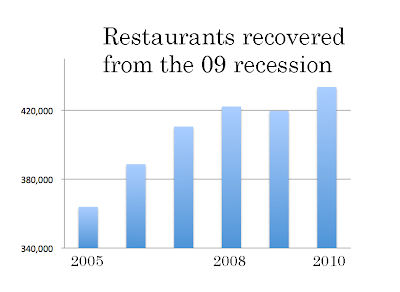 The At Home and Away total 2010 food bill came to $1.2T. That makes eating the largest industry in America.

In 1930 19% of all food consumed was Produced at Home. By 1960 that percentage had fallen to 6%. In 2010 it was only 1.6%. While this trend is not surprising, the magnitude of the drop is worth noting. At one time we were a nation of gardeners, today we just do ‘drive through’.

The food we eat makes us sick. The 2010 estimate for food related illnesses came in at a lumpy 76,000,000 people (About ¼ of us get sick every year). These illnesses caused 325,000 hospitalizations and 5,000 deaths. The economic costs of these illnesses came to $152 billion. In other words, the bad food we eat cost us significantly more in 2010 than the combined operations in Iraq and Afghanistan.

It’s not surprising that the US pays less for food as a percentage of income than any other country. But the comparisons are still interesting. The US spends 6.5% of disposable income for food. Poorer countries like Nigeria, Kenya and Cameroon are forced to pay ~45% of incomes to put food on the table. The high population countries are as follows:

I find these numbers troubling. There is only one direction for them to go. The developing countries with big populations will see greater gains in income, with that will lead to increased food consumption. Approximately 30% of income goes to food in these areas. It’s hard not to see that this is going to push up the prices the globe pays for everything we eat.

It’s old news that China and the other big/fast growing populations are consuming an ever-increasing amount of the world's supply. But these numbers are scary big. If the underlying trends continue (why would they not?) then we are headed into supply problems that can only mean rapidly rising prices.

This conclusion gets back to the beginning. Food inflation in America is running today at 5+%. The USDA says the inflation will moderate next year. This is more government hopium. I’ll take the “over” on their numbers. In my view rapid increases over the next decade are baked in the cake.

The most regressive economic consequence is for food inflation to take place. We have 45mm Americans on food stamps and tens of millions of others on the edge. I find it ironic that the Federal Reserve excludes food inflation when setting monetary policy. While the Fed can’t be blamed for rising food costs, they are most certainly stoking the fires.

Bernanke has said he wants to contain inflation (excluding food and energy) at less than 2%. Food inflation is running at double his target. Possibly Ben needs a new Mandate. 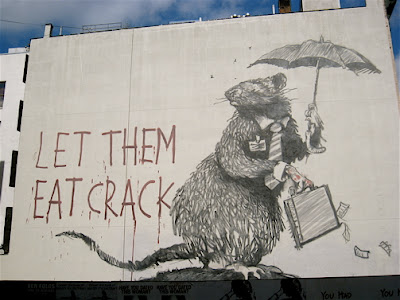