Not Raising the Debt Ceiling Would be Blessing; Debt Limit Analysis; Interactive Map, You Decide What Not To Pay

As the chances of a gaseous Congressional compromise to do nothing about deficit reduction grow larger, inquiring minds wonder just what might happen if nothing passes.
Contrary to popular belief, the US would not default. Troops would still be paid. Medicare and Medicaid would not stop. The Bipartisan Policy Center has a nice analysis in a PDF on Debt Limit Analysis.
NO “SILVER BULLETS” TO EXTEND DATE 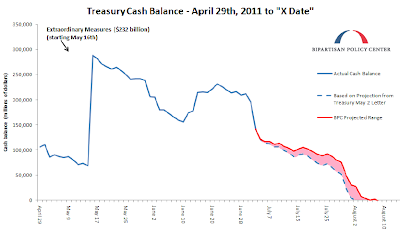 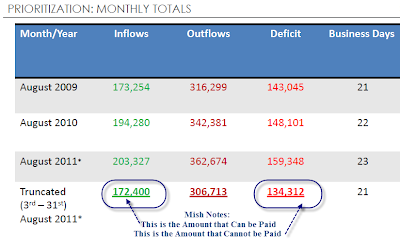 Obama's, Geithner's, and Bernanke's statements about default simply are not credible. Nor are threats of cutoffs to military pay or Social Security. Indeed those totals allow Medicaid and Medicare to be paid.
The PDF covers alternate scenarios of what can and cannot be paid.
Interactive Map, You Decide What Not To Pay
I contend there is easily a month or more to work out a better deal. There are many programs we can easily do away with that should not be funded at all.
Please consider You choose: who gets paid (and who doesn’t)

On August 2, the federal government will not have enough cash to pay for all of its programs and obligations. The U.S. will take in a total of $172.4 billion in revenue during the month, but its total payments exceed $306 billion, resulting in a $134 billion shortfall. If a debt-limit increase is not approved, the U.S. Treasury will have to choose among 80 million monthly payments and prioritize which programs are funded and which ones are not. 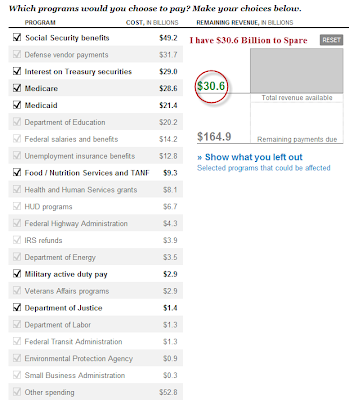 As you can see, I have $30.6 billion to spare.
The first thing TO pay is interest on the national debt. It is non-payment of interest that would constitute default. Thus talk of default if Congress does nothing is still the height of silliness.
The first thing to NOT pay should be congressional salaries.
As you can clearly see there are many things that would be a benefit to not pay, and never pay again.
Things to Not Pay and Never Pay Again
Clearly those things would have to be phased out, but the total of those things is a whopping $92.9 billion. That "Other Spending" category may have some essentials, but certainly most of it is not. Also bear in mind, I have $30.6 billion to spread around as needed. Some can go to salaries, but certainly not salaries of Congress.
In contrast, please see Boehner's Credibility Gone in Revised Proposal; Boehner Tells Congress to "Get Your Ass in Line"; Best Deal Republicans Can Get? for Boehner's revised cop-out.
All things considered, especially since Boehner's credibility is gone in his latest gaseous proposal, would be for Congress to NOT hike the debt ceiling and work out a credible plan over the next month.
Mike "Mish" Shedlock
http://globaleconomicanalysis.blogspot.com
Click Here To Scroll Thru My Recent Post List