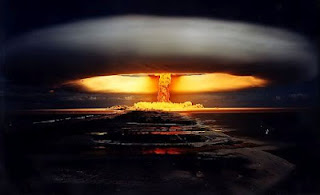 11 August 2012: It has become blatantly apparent that in attempting to advance his Islamic Antichrist-Islamic Empire theory "Joel (not his real name) Richardson" has finally figured out that he must attack and diametrically oppose the entirety of current eschatological discernment and exegesis of Pre-70th Week Dispensationalist book writers, article authors and lay brethren. In short "Joel" has endeavored to become the leading pre-70th Week antagonist against what we believe is true and correct as led by the Holy Spirit. "Joel's" entire so-called "ministry" stands in abject denial of the doctrine of the Harpazo/Rapture and all proper hermeneutics regarding 'last days' prophecy teaching.

In this latest attempt it is the sum of Spirit-led exegesis regarding Isaiah 17 held by the vast majority of Pre-70th Week Dispensationalists that "Richardson" finds to be a simplistic and less then carefully executed study of God's Word. Moreover, and as has become a routine par for this course, direct aim has been taken by "Joel" at two of my favorite fellow Christian eschatologists, Dr. David Reagan and Bill Salus. This is made overtly obvious in the fact that the entire premise of this latest sensationalist, beggar's plea for people to buy his latest book, the WorldNetDaily/Joel's Trumpet article is based upon a Bill Salus statement on the literal fulfillment of Isaiah 17 taken directly from Dr. Reagan's very recent July 17, 2012 "Signs of the Times Prophetic Forum."

Richardson's proclivity for simplistic and shoddy research on these eschatological subjects has, as one has come to expect, also made its appearance in this article. I refer to the ludicrous yet very self-serving (i.e. book sales) eisegetical statement Joel makes in writing "in none of the popular discussions of this text does anyone ever bring attention to Israel’s desolation."

Well, in the first place, the spirit-filled prophecy of Isaiah 17 says nothing about this obvious coming military action resulting in "Israel's desolation." Secondly, specific and due exegesis does exist regarding the text of Isaiah 17:4-6. It can be found here, here, and most recently here on this Eschatology Today blog alone, as well as in an article by Britt Gillette at RaptureReady.com, and in Bill Salus' most recent book (which "Joel" so loves to disparage): Chapter 6 of "Revelation Road: Hope Beyond the Horizon," entitled "There's Trouble in Tehran and Destruction in Damascus," just to name a few.

The overarching problem "Joel Richardson" and WorldNetDaily are going to have in the near term will be the flood of requests for refunds for the thoroughly discredited and proven false series of "Islamic Antichrist/Mideast Beast" books. This flood of requests will may well materialize after Damascus is reduced to a heap of ruins; the cities of Aroer are abandoned, and the "Palestinian" fortress has ceased to exist in Ephraim (Judea and Samaria, a/k/a the "West Bank") as well as for the regime in Damascus and the whole of Syria (Aram). Those who bought those books would do well to bonfire them during a late summer barbeque and save themselves the aggravation of demanding a refund that will never come. Fool me once... you know the rest.

Indeed the simplicity of "Joel's" error-prone human mindset vice a Spirit-led exegesis on these eschatological issues can also be found manifest in the very convenient and equally self-serving ignoring of a prophecy intimately related to Isaiah 17, and that is the God-breathed prophecy of Jeremiah 49:23-27.

“Hamath and Arpad are shamed,
For they have heard bad news.
They are fainthearted;
There is trouble on the sea;
It cannot be quiet.

Damascus has grown feeble;
She turns to flee,
And fear has seized her.
Anguish and sorrows have taken her like a woman in labor.

Therefore her young men shall fall in her streets,
And all the men of war shall be cut off in that day,” says the Lord of hosts.

“I will kindle a fire in the wall of Damascus,
And it shall consume the palaces of Ben-Hadad.

Jeremiah's prophecy against Damascus is an absolute confirmation of everything the Pre-70th Week Dispensationalist's have thus far placed in exegete regarding Isaiah 17. The inclusion of Hamath (modern-day Hama) and Arpad (the very near vicinity of modern-day Aleppo) confirms our exegete regarding Damascus and the remnant of Aram (Syria).

In addition to the failure to include the whole of this confirmation from Jeremiah, there is also a failure to have explored the meaning of the metaphor found in the last sentence regarding the consuming (i.e. destruction) of "the palaces of Ben-Hadad." This metaphorical statement is literally declaring the demise of the sons of a false god as derived from the original meaning of the phrase. In ancient times Hadad was another name used for the false god Ba'al. Today the only false god resident in Syria in our day is the false Islamic "allah." There is good reason to ignore this meaning if your present raison d'etre revolves around blattering the gospel of a nonexistent Islamic messiah instead of the Gospel of Jesus Christ.