In response to US Treasury Bull Market Not Over; Record Low Yields; Shades of Japan; Why QE3 Totally Useless my friend "BC" has some opinions I would like to share. 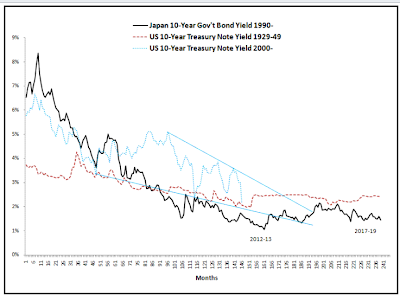 click on chart for sharper image
The self-similar secular pattern implies the 10-yr. yield well below 2%, and perhaps below 1.5% along the way, which would imply a trend nominal GDP in the 1% range and core CPI falling to around 0% or negative during a global deflationary contraction.
Further, this implies that corporate top line revenue growth will be virtually non-existent and not even as fast as depreciation, discouraging growth of investment and payrolls, and encouraging further large-scale firings and mass consolidation of capacity across sectors.
The flattening of the yield curve will squeeze further the net margins of banks and ROA and ROI of insurers and non-bank financial firms, discouraging lending and risk taking. Banks could see their net margin fall from 3% to 1%, which will be below what is likely to be the charge-offs against loans.
With the yield curve so flat, low net margin, and high charge-offs, banks will benefit very little, if at all, from further Fed printing with little or no net capital gain margins left to capture from selling assets to the Fed. This is among several factors that will result in bank loans converging with the monetary base over time, and banks' cash and securities holdings converging with loans during the period, which is what should occur in any event, were fractional reserving not to exist and banks be required to lend "their own money" (or that of their shareholders).
However, once this next cycle for yields resolves, despite the prospects for the 10-yr. yield to average in the 2% area for the most of the decade, US government debt will effectively become "certificates of confiscation".

"BC" is essentially discussing the likelihood for another "lost decade" just as Japan experienced.
If so, expect low interest rates and poor economic growth for close to another decade. Also expect the US will flirt with recession and deflation on and off during the same period. Most do not give credence to deflation at all, even though the US is clearly back in it.
Mike "Mish" Shedlock
http://globaleconomicanalysis.blogspot.com
Click Here To Scroll Thru My Recent Post List