Swiss to Join the EU – NOT!

Both USDCHF and EURCHF are up on the day by a very big 5%. This is mega volatility. The “book” and cash gains and losses are staggering. Some finance ministers are sighing relief over this. I look it at and just see extreme instability.

No doubt but that the Swissie was overbought against all crosses. Some type of correction was in order. The Swiss National Bank has dumped a ton of liquidity (CHF 90B) on the market. This has pushed Swiss rates below zero. This distortion contributed to today’s reversal. But it was a story out of Zurich that Switzerland was contemplating joining the EU that was the real catalyst for the reversal. Some details. 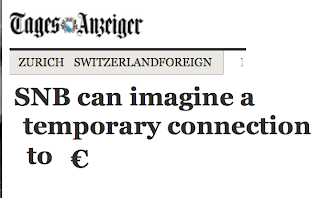 An SNB VP, Thomas Jordan, had this to say: (my translation and original text)

The SNB may consider a temporary link to the Euro.

This was the sentence that got the markets roaring. The TV folks jumped on this “good news” story. But they left out the next sentence:

A permanent connection of the franc to the euro, however, is not compatible with the laws of the Swiss constitution.

For Switzerland to join the EU and abandon the Franc as the national currency it would require a national referendum and a change of the constitution. It was 160 years ago in 1850 that Switzerland established the law that ensured they would be a global reserve currency. That decision has paid dividends to the Swiss damn near every year since. I see little prospect for such a major change anytime soon.

A similar approach was defeated in 2001. At that time the Euro zone was thriving with the reduced inflation and expanded debt market that Euro intergration first brought. The Swiss didn’t want any part of the EU when things were good. It’s very unlikely they would want to sign up when things are falling apart. The Swiss would look at this as a bailout of Southern Europe. That is an extremely tough sell in Switzerland. It would take a year before there could be a vote on such an important change in the constitution.

Shortly after the Zurich report a Paris based NYTs writer, ran with the story. The Times used the same misleading headline. 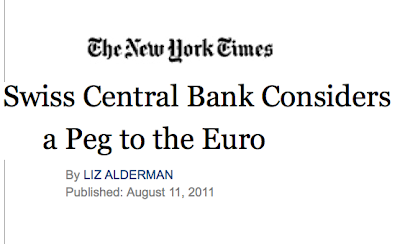 This story had the same conclusion as everyone else:

A (currency) peg would require changing the Swiss constitution, which has regulated the currency since 1850.

Linking the franc to the euro could not happen overnight, and would face steep legal and political hurdles.

A tangent on this story:

I had the TV on this morning with the cheerleaders at CNBC on in the background. About 9:30 one of the regulars (Pisani?) reports on the Daily Mail’s gaff yesterday and apology today. The Mail ran a story suggesting that French banks were facing liquidity problems. They had to withdraw it today. CNBC’s comment was something about responsible journalism and market rumors. Like CNBC is above all of that.

A few minutes later another (blonde) comes on and leads with the Times headline. She says nothing about the substance of the article. She spins it like this is a “good news” story and even throws out a fabrication she heard someplace that the conversion rate for the EURCHF peg would be at 1.15. With this, CNBC started a massive rumor that ended with one of the biggest movements in the CHF in history.

At the time this lie was told the EURCHF was about 1.04. So CNBC was suggesting the Franc would fall by 10+%. That is a very big move. CNBC added to the panic trading. So much for that integrity thing…

First, I put the odds of a CHF peg at a very low level. I think this was the SNB's way of talking down the currency. They used the press to achieve their ends.

Second, let’s consider what it might take to actually get the Swiss people to agree to abandon the Franc and embrace the Euro. It is also necessary to consider what key conditions the big core Euro countries would insist on as a condition for the Swiss joining their party.

It just so happens that both conditions are the same. The EURCHF would have to be much lower than it is today. It would have to be below par. It would probably require a fixing at .90 CHF per Euro. That would imply that the Franc would have to APPRECIATE by as much as 20% before it would be acceptable to both the Swiss people and the politicians in Brussels.

To get the Swiss to vote YES they would have to be bought. All Swiss have savings. A conversion to Euros at .90 would make them “Euro Rich”. While the Swiss may value their currency independence they also know their exchange rates and a big profit. At the “right” currency rate the vote could be bought.

So everyone with a seat at the table wants a strong Franc (Swiss industry would squeal, but they don’t vote. The Swiss farmers would get rich).

When CNBC threw out the fictitious rate of 1.15 it added gas to today’s market frenzy. I don’t doubt that someone heard this number being bandied about. I wonder if it was not from some Swiss journalist rather than a financial person. A Swiss could look at this from their perspective. 1.15 can also mean the numbers of Euros each Swiss Franc would convert to. In FX markets we think of EURCHF. Swiss people think of it as CHFEUR. Just for the record, 1.15 CHFEUR is the same as EURCHF at .8700.

I’m at all sure what comes next for the CHF. We are in very unstable times. I see no reason why stability is going to show up tomorrow and stay for a long visit. What I do know is that the talk of a CHF peg is very premature, I know that if it were to happen it would have to be at levels much lower than exist today. I also know that one should not get their thinking on FX from the touts nice folks at CNBC. 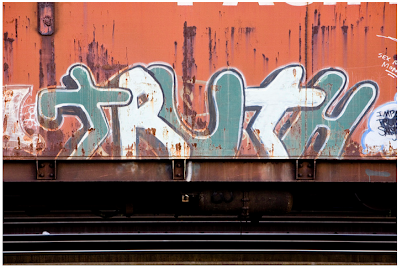