While flicking through the thousands of RSS entries I've missed in the aftermath of the wedding, this scary commentary at the British Medical Journal drove face to palm (emphasis mine).

High dietary salt has detrimental effects on blood pressure and cardiovascular outcomes. The question, say Francesco Cappuccio and colleagues, is not whether to reduce salt intake but how to do so. With the upcoming United Nations High Level Meeting on non-communicable diseases in mind, they make the case for population level policy interventions.

This refers to the same non-communicable diseases summit I mentioned in this piece, where finger-waggers from around the globe will gather to decide how you should be be forced to live as they demand that you do.
The 'rapid responses' to the BMJ article are very interesting, especially this one.

The sodium phantom
Robert A. Da Prato, Physician
Military Entrance Process Station, Portland OR 97220
It remains remarkable to me that the anti-salt medical faction ignores or is intolerant of the obvious evidence that certain Asian populations (Japanese, Chinese, and Koreans, for example) have a sodium intake far in excess of the average Westerner, have normal/low blood pressure, and live longer. Huang (1) noted that in her hometown in northern China "hypertension is a rare disease and arteriosclerosis is a virtually unknown condition" despite an average sodium chloride intake of 30 grams per day, perhaps three or more times that in England and America.

Chinese food is, indeed, rich in salt as the BBC were more than happy to highlight in a graphic from 2008. 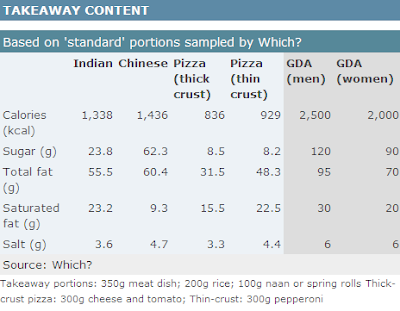 Now, I found this very interesting for anecdotal reasons. Last weekend, Mrs P and I spent a couple of days in a town around 60 miles away. On the recommendation of a friend who used to live there, we had pre-booked a table at a particularly fine Chinese restaurant on Saturday night.
Although far from home, there was no salt on any of the tables - just as is the case at the two local Chinese places we frequent. We don't see this with any other genre of food around our way ... just Chinese.
Now, I do like to enliven my rice with a sprinkling of the stuff, so asked for some, only to be met with the same reticence as I do back home - an almost shocked look coupled with a feeling that they really don't know what to do when faced with such a request (though I'm sure it must happen quite regularly). It's not the disdain one might expect if it is seen as insulting the chef, either. No, this is a more uneasy, or even fearful, reaction.
When they do bring some to the table at our most local restaurant, out comes a tiny white bowl not much bigger than a thimble, containing about half a teaspoonful. I'd always wondered why the big deal at these places about salt when it is well known that Chinese food uses quite a bit of it in preparation.
On reading at the BMJ that a full-scale global 'population level policy' is not only being debated, but has almost been decided on in advance, I'm starting to believe that Chinese restaurateurs may be feeling the heat from the ever-growing demonisation of salt. Perhaps even pre-emptively going on the defensive.
Anyway, I digress.
So, is there cause for such urgent global action over salt? Is the debate really over? Is there overwhelming evidence as Francesco Cappuccio insists?
Regular readers here will have noticed the rent-seeking buzzwords above and be instantly cynical. I won't disappoint you. The answer is, of course not.
The jury was out in 2009.

The best available evidence on how salt consumption affects our health comes from observational studies, in which groups of subjects are investigated to identify any correlations between usual sodium intake and subsequent heart attacks and strokes. Nine such studies, looking at a total of more than 100,000 participants [...] have had mixed results. In four of them, reduced dietary salt was associated with an increased incidence of death and disability from heart attacks and strokes. In one that focused on obese people, more salt was associated with increased cardiovascular mortality. And in the remaining four, no association between salt and health was seen.

And, if anything, the evidence to justify global policies to reduce salt has evaporated since.

A new study published in the Journal of the American Medical Association (May 4 [2011]), reports that among 3,681 study subjects followed for as long as 23 years, the cardiovascular death rate was more than 50 percent higher among those on who consumed less salt.
The researchers concluded that their findings, “refute the estimates of computer model of lives saved and health care costs reduced with lower salt intake” and they do not support “the current recommendations of a generalized and indiscriminate reduction in salt intake at the population level.”

I've mentioned before how the UK movement against salt is one guy who has identified a lifetime of rent-seeking. But he is not alone.
The entire anti-salt industry is based on nothing more than woo, and scientific principles of a century ago, as described by Oxford Journals.

The modern salt saga started in 1904 with a paper by Ambard and Brochard who showed an association between salt intake and blood pressure in six patients. On the basis of these observations they created a salt–blood pressure hypothesis.
[...] in the mean time, we have got so many more efficient medical treatments that the place of sodium reduction in the treatment of hypertension is probably rather marginal. Today we even have a dietary measure that is more efficient and more acceptable for the patients than sodium reduction, namely the intake of fruits and vegetables.
[...] considering that the salt controversy now is dealing with an effect size of about 1 mm Hg, one may ask, has it been worth 100 years of effort?

Not really, no. But it's certainly worth it for those who now earn a pretty penny by keeping the scaremongery going.
The effects of too much salt are inconsequential, while the benefits of reduced salt consumption are on a par with those of homeopathy.
Yet here we are, in the 21st Century, with a Health Secretary committed to wasting time and resources tackling a tiny problem, to the detriment of personal choice.
And Chinese restaurants.
Funny old world, innit?