The Psalm 83 War: The Final Phase 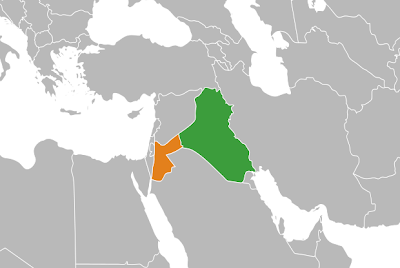 18 December 2010: Now it begins. Now that the last American combat troops have departed from Iraq and crossed the common border back in to Kuwait the nation of Iraq can resume its role in the war of attempted extermination of Israel as prophesied for these last days some 3,000 years ago by the Psalmist Asaph - the Psalm 83 War. Now the way is clear for the final and literal fulfilment of Psalm 83, and with particular respect to verse 8 (emphasis added).

1Keep not thou silence, O God: hold not thy peace, and be not still, O God.

2For, lo, thine enemies make a tumult: and they that hate thee have lifted up the head.

3They have taken crafty counsel against thy people, and consulted against thy hidden ones.

4They have said, Come, and let us cut them off from being a nation; that the name of Israel may be no more in remembrance.

5For they have consulted together with one consent: they are confederate against thee:

6The tabernacles of Edom, and the Ishmaelites; of Moab, and the Hagarenes;

7Gebal, and Ammon, and Amalek; the Philistines with the inhabitants of Tyre;

8Assur also is joined with them: they have holpen the children of Lot. Selah.

This specific aspect of the Psalm 83 prophecy, the military linking of Assur (Iraq) and the children of Lot (Jordan) has been one of uncertainty for the past couple of years. My interpretation has been that it is direct reference to the assistance rendered to the Sunni Arab armies by Iraq in the wars of 1948, 1967 and 1973.
Then, for the past 20 years, Iraq had not been in a position to fulfil this role as it again is this very day - a position of being of militarily capable of assistance to Jordan and the Sunni Arab allies seeking to complete the military destruction of Israel. This news was first reported in English-language Arab media about one moth ago:

Jordan, Iraq to step up military cooperation ahead of US pullout

AMMAN: The commanders of the Jordanian and Iraqi armies on Tuesday expressed desire in boosting bilateral military cooperation as the US troops prepared to leave the neighbouring violence-torn country, according to the official Petra news agency.

Zibari and Al-Zaben "praised the he distinguished standard of cooperation between the armed forces in the two brotherly countries and expressed desire in boosting this cooperation in all military spheres and in such a manner that fulfils the aspirations of the two armies", Petra said.

The talks were attended by the commanding general of the US forces in Iraq Lloyd J. Austin III, who has warned that violence could grow in Iraq after the US withdrawal.

The visit by the commanders of the Iraqi army and the US troops in Iraq stirred speculation that Jordan could be tasked again with the training of Iraqi troops after the withdrawal of US forces from Iraq by the end of the year.

The Jordanian Army trained tens of thousands of Iraqi troops and policemen after the 2003 US-led invasion of the neighbouring Arab country that toppled the regime of President Saddam Hussein.

The training of the Iraqi Army is emerging as an extremely sensitive issue after Iraqi politicians voiced reservations over keeping US personnel to train Iraqi soldiers beyond 2011.

The government of Prime Minister Nuri Al-Maliki also reportedly turned down an Iranian offer to train the Iraqi Army.

So, here we are, yet again on the cutting edge of prophetic fulfilment.